It is located in the heads-up display on the upper right-hand corner of the screen, where it remains constantly, even when the player is being jumpscared by one of the animatronics (with the exception of running out of power in the first game and when wearing the Freddy Fazbear Head in the second game). Once the clock reaches 6 AM, the night ends, and the player moves on to the next night.

The main objective in all of the games is to survive until 6 AM without being killed by the animatronics. The clock always starts at 12 AM, which is the beginning of the protagonists' night.

In the first game, each hour lasts approximately 86 seconds, making each night last around 8 minutes and 36 seconds long. On the mobile version, every hour lasts approximately 45 seconds, making every night last around 4 minutes and 30 seconds. After the clock reaches 6 AM, the screen fades away, showing the time roll over from 5 AM to 6 AM. A bell jingle plays to denote that time is up, accompanied by a chorus of cheers from excited children.

In the second game, each hour lasts only about 68 seconds, making a night only approximately 6 minutes and 48 seconds, making the duration of the night significantly shorter than the first game's PC version. Unlike the first game, there is no difference in the passage of time between the PC and mobile version. The design is now more akin to that of a digital clock, with a slightly higher-pitched jingle. Confetti now rains down as the clock turns to 6 AM. The cheering sound byte remains unchanged.

In the third game, each hour is approximately 58 seconds long, making each night approximately 5 minutes and 48 seconds long. Once again, there is no difference in time length between the PC and mobile version. This marks the third game as having the shortest hours, and by extension, nights in the series, excluding the first game's mobile version. On the other hand, with Fast Nights enabled, each hour will last 27 seconds, making each night 2 minutes and 48 seconds, slightly more than half as long as the first game's mobile version. While the chime for the end of the night is the same as the second game, the visuals are dramatically changed. A section of the background momentarily flashes a shade of dull green-yellow on a horizontal strip, the numbers flash green and yellow, and instead of a transition from 5 AM to 6 AM, it is now 5:59 AM to 6:00 AM. Oddly, the cheers of children are still present.

In the fourth game, each hour is approximately one minute long, making each night approximately 6 minutes long. Oddly, in this game, instead of the clock chimes from the previous 3 games, the sound of a digital alarm clock chiming can be heard. The visuals are also dramatically changed. The time on the clock appears to start at 00:00 before the numbers change to seemingly random times.

The clock will continue to run even after the power has run out, despite disappearing from the top right corner. Until the player gets caught, they have a chance of advancing to the next night. This also applies for when The Puppet is free from the Music Box, or when BB is in The Office. As long as the player survives long enough, the night will end.

The chimes at 6 AM in Five Nights at Freddy's.

The alarm clock at 6 AM in Five Nights at Freddy's 4. File:Alarmclock4.ogg 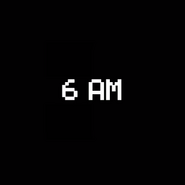 At 6 AM.
Add a photo to this gallery

At 6 AM.
Endofnightfnaf2real.gif
At 6 AM (click to animate).
Add a photo to this gallery