Were you looking for the Hallucinations from the second or third game?

Hallucinations (FNaF1) are a game mechanic Mike Schmidt may experience throughout the game.

There are three main types of hallucinations. Most of the hallucinations are randomized, and can occur at any time on any night, even happening as early as before the first phone call.

There are two types of hallucinations that the player can experience, as well as one distinct hallucination that affects gameplay:

This hallucination is special because it will result in a unique kill-screen and a forced game shutdown if he is observed for too long. However, if the player quickly draws up the Monitor while Golden Freddy is sitting in the room, Golden Freddy will disappear and the player will not be attacked by him.

The hallucinations as seen in game (click to animate).

Freddy. Note the human eyes, and the blood vessels in them.

"IT'S ME," a phrase that appears not just in hallucinations, but around the pizzeria as well.

Another shot of "IT'S ME," a phrase that appears not just in hallucinations, but around the pizzeria as well.
Add a photo to this gallery

After Foxy leaves Pirate Cove, the sign rarely says “IT'S ME" Instead of “Sorry! Out of Order“

Another "IT'S ME" hallucination on the wall. This may occur in the East Hall.

Another East Hall hallucination where the posters change to posters of crudely drawn crying faces. 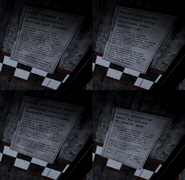 The four variations of articles appearing as hallucinations in place of the Rules for Safety sign describing speculation about The Missing Children Incident.

All of the animatronic heads as well as the endoskeleton staring at the camera.
O2hyThN.png
Freddy ripping his head off in the poster.

The Golden Freddy poster appears.
Add a photo to this gallery