Were you looking for the Phantom Animatronics or their Jumpscares; or perhaps the Hallucinations from the first or second game?

Hallucinations return in Five Nights at Freddy's 3 as a random game mechanic that the security guard may occasionally experience throughout the game.

It is entirely possible for multiple phantom animatronics to appear on the Monitor in one run. Phantom BB, Phantom Chica, and Phantom Puppet can be seen doing this in this video.

Similar to the eyeless screen hallucinations from the first and second games, the player may encounter a picture of Springtrap. When starting a night, there are three images which the player can encounter. Upon closer inspection, the corpse of Purple Guy can be seen inside of Springtrap.

In the third screen, Springtrap can be seen almost opening his entire head in a manner similar to the Freddy poster hallucination in Five Nights at Freddy's, revealing mostly the corpse's remaining head inside the suit. The sound that plays during this is the sound byte of the Purple Guy killing the player in the end-of-the-night minigames. This is also true for the mobile version.

On CAM 02 and CAM 10, the player has a rare chance of seeing the posters of Freddy change to posters of Springtrap's original counterpart Spring Bonnie. There is no known trigger for this, yet they do appear at very rare intervals. The purpose for these occurrences are unknown, as they have no known effect on gameplay. The posters return to their normal appearance when Springtrap is located on these cameras.

If the player has a ventilation error for an extended period of time, they will begin to see several Springtraps in different rooms throughout the building. However, only one of them is real, and the rest will just be hallucinations. If the player uses the "Radar" cheat unlocked on the Extra menu, it would allow the player to determine where the real Springtrap is. Rebooting the ventilation system would also get rid of the false Springtraps. This is also true for the mobile version.

Shadow Freddy make his second appearance in the game as, yet again, a minor hallucination.

Rarely, the player may see what appears to be Shadow Freddy slumped in the left-most end of the Office. He looks identical to his appearance from the second game, except lacking white eyes, leaving his eye-sockets completely empty, and his teeth don't glow.

Shadow Freddy assumes the same position that Golden Freddy and himself do in the previous games. However, unlike in the second game, he doesn't cause the game to crash. This also coincides with the purple-hued Freddy that leads the player along during each end-of-night minigame, but no connection has been confirmed. This is also true for the mobile version.

When brightened, without reducing green levels, he appears to take on a yellow-green tint, which may suggest it to be Golden Freddy. If the green levels are reduced, the color appears dark purple, showing that it is in fact, Shadow Freddy.

On Night 5, a hardly-visible figurine of Shadow Bonnie appears on the far right of The Office desk. If the player clicks the figurine twice, the Glitch minigame will start.

If the figurine was brightened and contrasted, it appears to have lighter blue shades from the right side.

Rarely, on CAM 04, what is normally a poster of Toy Bonnie will change to an image of either a gold or a pink Cupcake. Although it is a rare occurrence, it serves no known purpose. It is unknown what triggers this strange event. It is also unknown if this occurs in the mobile version.

On Night 3, dark-looking Cupcakes with gray colors and glossy-black eyes will appear on CAM 02, CAM 03, CAM 04, and CAM 06. Clicking on the cupcakes will automatically start the hidden minigame, Chica's Party. Although these appearances do serve a purpose (accessing the minigame), there is no logical explanation as to why they would only appear on Night 3. This doesn't occur on the mobile version because Chica's Party will automatically start at the end of Night 2.

Rarely, a cupcake can appear in the Office. Unlike the aforementioned appearances of the cupcakes on CAM 02, CAM 03, CAM 04, and CAM 06, the cupcake in the Office is identical to the one from the Office in the first game. Contrary to popular belief, it is not triggered when the player collects all the cupcakes in Chica's Party. It is unknown what purpose it serves, as it does not affect gameplay. This is also true for the mobile version.

Second of the three rare boot images.
Add a photo to this gallery 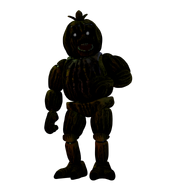 Phantom Chica as she appears in the Extra Menu.

Phantom Puppet as it appears in the Extra Menu.

Phantom Puppet in CAM 08. Oddly, it has its design from the second game. 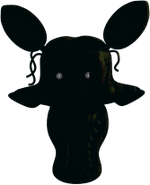 Phantom Puppet staring at the player in The Office (click to animate).
Add a photo to this gallery

Dark-colored Toy Bonnie figurine texture that appears in The Office on Night 5.

Five Nights at Freddy's 3 - Rare Springtrap Screen.
One of the rare boot screens encounter.
Spring Trap Death Screen Easter Egg - Five Nights at Freddy's 3
Another rare boot image encounter after receiving a game over.
Add a photo to this gallery
Retrieved from "https://fnafapedia.fandom.com/wiki/Hallucinations_(FNaF3)?oldid=3086"
Community content is available under CC-BY-SA unless otherwise noted.