Were you looking for Phone Guy, or perhaps Purple Guy?

Mike Schmidt is the main protagonist in Five Nights at Freddy's. He is a security guard employed by Freddy Fazbear's Pizza. The game is played in the first-person perspective, through Mike's eyes.

Despite the low pay and clear danger, Mike continues his job every night for the rest of the week for unknown reasons. At the end of Night 5, Mike Schmidt receives a check for $120.

At the end of Night 6, he receives a comparatively minuscule check of $120.50, an increase of fifty cents. He also receives a note from his boss, stating that he has "earned some overtime!"

Upon completing the Custom Night, he receives a notice of termination, likely due to the in-game interaction right before said night, customizing the animatronics A.I. (which the notice describes as tampering with the animatronics).

There is no possible way to see Mike's physical appearance in the game, as the player is forced to stay in the first-person view for its entirety.

The only body parts of Mike that can be seen in the game are his blue eyes and teeth, which can only be seen in the Game Over screen after he has been stuffed into a Freddy Fazbear suit.

Little is known about Mike's character. Why he would continue working at a failing pizzeria with a high risk of death for pay below minimum wage is unknown and could possibly be attributed to either altruism (so nobody else would have his job and risk being killed), desperation, or thrill-seeking on his part. Considering Freddy's "Toreador March" is one of the main themes of the game and that it deals with thrill-seeking, the latter is somewhat more likely.

Jeremy Fitzgerald is the primary protagonist in Five Nights at Freddy's 2. He is the security guard employed by Freddy Fazbear's Pizza who worked the Midnight to 6 AM shifts from Sunday, November 8th, 1987 to Friday, November 13th, 1987 before being moved to the day shift. The game is played in his first-person perspective. Overall, he is very similar to Mike Schmidt, the comparably silent protagonist from the first game.

Upon being hired, Jeremy is informed by Phone Guy of the details of his new occupation, also learning that the guard before him was moved to the day shift due to the animatronics trying to get into The Office.

Jeremy eventually completes Night 1, but despite the low pay and clear danger, he continues his job for the remainder of the week. As the nights pass, Jeremy learns that someone tampered with the animatronics, eventually leading to the restaurant's closing, and that he may be moved to the day shift as the "position just became...available" while the company tries to find someone to cover the night shift.

After the end of Night 5, Jeremy receives a check for $100.50. During Night 6, Phone Guy tells Jeremy that the next day he will work the day shift and is to closely monitor the animatronics during a birthday party. Upon completing the night, Jeremy receives a check for $20.10 for overtime, as well as a newsletter that says the restaurant is closing. In the Custom Night, Jeremy is replaced by Fritz Smith for his only night.

Similar to Mike, Jeremy's appearance is never seen, as the player is forced to stay in first person view for the entirety of the game. Unlike Mike, when Jeremy is killed, the Game Over screen is viewed from Jeremy's eyes, when he is stuffed in a Freddy suit.

Little is known about Jeremy though he seems to behave similarly to Mike. It can be assumed that Jeremy is focused and competent, being able to hold off up to eleven animatronics at any one time. Unlike Mike, however, he does seem to show some fear and anxiety during gameplay, as heard in his sharp and heavy breathing when he puts on the Freddy Fazbear Head. The significant lack of papers on Jeremy's desk compared to Mike's may indicate that he is more organized and neater, although it may also simply imply that there was less paperwork needed in 1987, which may parallel with the restaurant's issues in the first game.

Jeremy Fitzgerald breathing with the Freddy Fazbear Head on.

Note: Frtiz Smith's appearance is only on one night, one not considered to be canon, and thus his legitimacy as a character is debatable.

After Jeremy completes Night 6, he is presumably moved over to day shift. A character by the name of Fritz Smith takes over for the Custom Night, but is immediately fired the following day for tampering with the animatronics.

Throughout the entire night, Fritz is functionally identical to Jeremy Fitzgerald in every way. Strangely, he even sounds exactly the same as Jeremy when breathing with the Freddy Fazbear Head on. However, based on the fact that his notice of termination listed "odor" as one of the reasons for him being fired, it is possible that he was also sweating and/or releasing bodily fluids similar to Mike, suggesting a panicked, nervous behavior.

Since the game is viewed in first person view for the entirety of the game, their physical appearance is never seen. They appear to be male, judging by the panic sounds he makes when jumpscared by the phantom animatronics.

Based on the constant visions the guard sees of the phantom animatronics, it is possible that they may frequently be panicked and/or paranoid to the point of having hallucinations. Additionally, their deep, panicked breaths heard after being jumpscared by the phantoms indicate that they also show fear and anxiety during their shift, similar to Jeremy and Fritz.

Despite this, the guard appears to be relatively focused and courageous, as they are able to recover from the phantoms' jumpscares relatively quickly and are able to fend off Springtrap throughout the night.

The protagonist breathing heavily due to ventilation systems failing.
File:Breathing.ogg

Template:FNaF4 Protagonist Infobox The Protagonist in Five Nights at Freddy's 4 is a young child. Not much is known about him, although several fans speculate that this child could very well be the victim of The Bite of '87.

As with four out of five of the protagonists, the child himself is never actually seen, aside from (possibly) in the minigames. Unlike Mike Schmidt from the first game, his death screen does not display any part of his body but rather a bloody, red screen.

Assuming the child is, in fact, the victim of the bite, he has a fairly light skin tone. His face is constantly stained with tears. He wears a black shirt with two lone gray stripes on it, and blue short trousers, an outfit which he wears for 6 days straight. He has constant black eyes and dark brown hair.

Not much is known about the child, aside from the fact that he is fearful as evidenced by what is likely his scream in the jumpscare sound from Five Nights at Freddy's 4. Despite this, the kid considers the plushies of the animatronics his friends, as revealed by the minigame before the first night, and the minigame after the sixth night. He has fair hearing, especially when considering Nightmare Bonnie and Nightmare Chica's quiet breathing.

If the child is indeed the bite victim, this means he is sad, as proven by the tears constantly running down his face. Another family member, assumedly his older brother, appears to constantly taunt and abuse him, actions that eventually led to his older sibling and his friends causing and witnessing the Bite.

With the nature of the minigames in the fourth game being heavily centered around the victim of The Bite of '87, many fans assume the two are one and the same character. This is further supported by several in-game elements. Occasionally, the player may experience a pot of flowers, an IV, or pills appearing next to the Bed, things not normally found in a Bedroom like the one the player inhabits.

This is further supported by the various teaser images released on Scott Cawthon's website. most of the Nightmare Animatronics' teasers contain the phrase "Was it me?" This, combined with the hidden 8's and 7's within the source code of Scott's website seems to mean the message is referring to the Bite of '87.

Considering the layout of the location has two hallways leading into the bedroom, it is commonly believed this is not actually the player's home, as this is an incredibly odd layout for a house. This has led many fans to assume that the events seen in the main gameplay of Five Nights at Freddy's 4 are not actually real. Nightmare Foxy will transform back into a Foxy plushie after being warded off. This seems to indicate that what is seen is not, in fact real.

Combining the two popular theories indicate that the character we play as is having nightmares about the animatronics who caused his demise. This is further shown in the fact that Nightmare Fredbear appears as the main animatronic on Night 5 and Nightmare doing the same on Night 7 onward, as Fredbear is clearly shown to be the one who caused the Bite of '87 and, as such, the child would be thinking about him in a different way than the other animatronics.

Game Over screen, brightened and saturated for clarity. 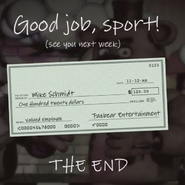 The termination slip following the Custom Night.
Add a photo to this gallery

The Game Over screen, shared by Jeremy and Fritz Smith.

Jeremy receiving overtime pay and a newsletter of the restaurant's closing.
Add a photo to this gallery

Fritz's termination slip.
Add a photo to this gallery
Retrieved from "https://fnafapedia.fandom.com/wiki/Protagonists?oldid=2993"
Community content is available under CC-BY-SA unless otherwise noted.