This article contains content that was not used in the first, second, and third games' final release. All of these files can be found in the game's files and the trailer.

In the trailer, Bonnie is shown removing his mask to reveal his endoskeleton. None of the animatronics do this in the final release of the game.Template:Clear

In the beta version, there was a life meter that would presumably limit the player's times of playing before they received the game over screen. However, this mechanic was not used in the final version of the game. Video footage of this feature can be found here.

The Monitor's early design shows different buttons for the camera. The camera icons were small circles with cones pointing in the direction they were facing. These cones may have indicated the camera's field of vision. They would turn green and become slightly larger when selected. Also some cameras were placed in slightly different locations. 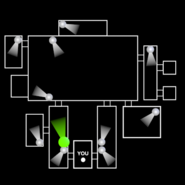 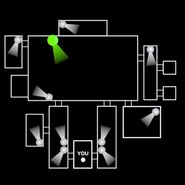 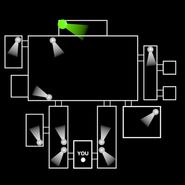 Beta Monitor, with Show Stage selected.
Add a photo to this gallery

Just like the first game, there is an unused Lives mechanic. There is a small bar that says "Lives" and a pixel stick-figure of a person with their arms outstretched.

There is a strange, empty meter in the game's files which is labeled only as "toxic." It is unknown if this was meant to be used in the main game or one of the Death Minigames, nor is there any idea of what it was meant to do. It could have possibly meant how long you had to wear the Freddy Fazbear Head, before having to take it off.

There is a strange image in the game's files which appears to depict part of a skull's face. The upper teeth are visible, with black streaming from the only visible eye. It is unknown what this was supposed to be used for.

Withen the games files, it is possible to find an unused button with the text "Seal Vent" on it. This button was probably going to be used to seal the vents, but in the final game it was replaced with double clicking the vent camera.

Retrieved from "https://fnafapedia.fandom.com/wiki/Unused_Content?oldid=4380"
Community content is available under CC-BY-SA unless otherwise noted.